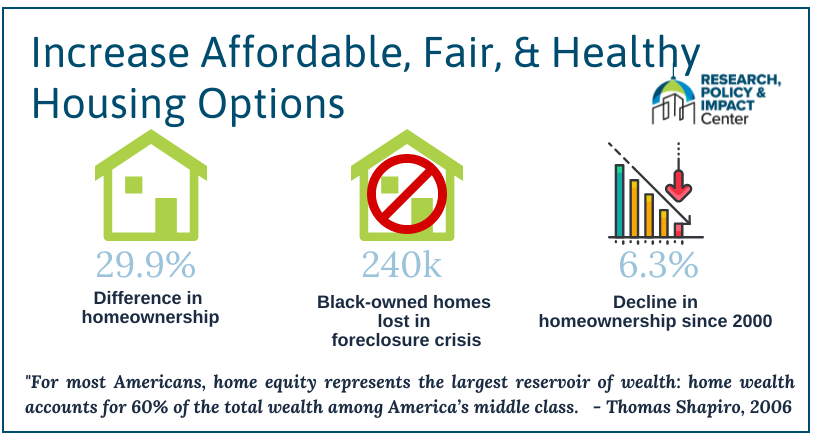 The relationship between income, housing, and wealth accumulation is interconnected. As Choi et al.  (2019) note, “there is a well-documented persistence of income inequality by race, a key factor contributing to the homeownership gap. Household income is a key input for mortgage underwriting determinations, and income is used in various calculations required for mortgage approval, such as the debt-to-income ratio.” [i] While the median income differences between white and Black households plays a major role in explaining the current differences in homeownership,[ii] research finds that “even among Black and white households in the same income cohort, there is a noticeable homeownership gap.”[iii] Evidence therefore points to the intergenerational impact of homeownership, and not income alone, as the accumulated inheritances and parental support that accompany home ownership, are “crucial in helping low-income households attain homeownership.”[iv]

Rather than narrowing, the gap in homeownership rates by race has grown steadily over the last century. In 1900, the gap between white and Black homeownership was 27.6%,[v] that gap has not improved in the last 121 years with U.S. Census Bureau data from April 2021 showing a 29.6% difference between white and Black homeowners. [vi],[vii] The difference in median wealth has been attributable almost entirely to homeownership and the passing of resources through inheritance. Shapiro (2006) explains that homeownership acts as a vehicle for savings and for growing capital over the life course: “Homeownership and housing appreciation are the foundation of institutional accumulation. Indeed, for most Americans, home equity represents the largest reservoir of wealth: home wealth accounts for 60% of the total wealth among America’s middle class.”[viii]

Black homeownership peaked in 2004 at 49.7%, but fell as a result of the foreclosure crisis in which “black families were hit particularly hard, housing data show, forcing many out of their homes and pushing black homeownership rates to record lows.”[ix]  In all, over 240,000 Black families or eight percent of Black homeowners lost their homes in the 2005-2008 period.[x]  The impact of the housing recession of was largely the result of predatory lending which, while increasing the number of minority homeowners, did so at higher interest and with worse lending terms for borrowers. Dey and Brown (2020) note, “at the center of the Great Recession was a subprime mortgage crisis that disproportionately affected Black and Hispanic homeowners. New mortgage originations declined whereas foreclosures and other reversals in homeownership increased, wiping out gains in minority homeownership rates.”[xi] Following the recession, Black households did not see the rebound in homeownership that white households experienced.[xii] In fact, between January of 2000 and January of 2019, Black homeownership fell 6.3% overall.[xiii] More importantly, “half of the wealth owned by Black households in the United States was destroyed.”[xiv]

“This neighborhood houses the large negro population living in Evanston. It is somewhat better than the average negro district in that the bulk of the houses are one family detached units in anything but a congested district for this class of population. Here live the servants for many of the families all along the north shore. There is not a vacant house in the territory, and occupancy, moreover, is about 150 percent for most houses have more than one family living in them. Sales have been very good where liberal financing terms are available, but on other sales mortgage financing is virtually impossible to obtain.  This concentration of negroes in Evanston is quite a serious problem for the town as they seem to be growing steadily and encroaching into adjoining neighborhoods. The two family structures are in most cases converted singles and they likewise are overflowing with occupants; these buildings are rented as unheated units. The number of persons on relief in this district is probably heavier than in any other area along the north shore. Although this area is unattractive to other than the class of occupants already here, it is difficult to say that the section is declining, for it is in constant demand because of the limited number of areas available for negro occupancy in the north shore towns.

Evanston, IL will be the first city in the United States to make good on their promise to offer a reparations program to its black residents that have suffered economic devastation from discriminatory lending practice (https://www.cityofevanston.org/government/city-council/reparations). In 2019, the city council voted to provide $10 million towards a housing program for black residents, and on March 1st the Council approved a $400,000 initiative to be doled out in $25,000 grants for home improvement or down payments. The grants will be made to qualifying residents who can show they lived in Evanston from 1919-1969 or were a direct descendant of an individual that lived in the area and suffered from discriminatory lending practices.

Evanston’s focus on housing is an excellent way to bring reparations to communities of color, who have suffered decades of discrimination and should be used as a blueprint for cities across the country. Too often the call for reparations begins and ends with reparations for slavery. While reparations for slavery are necessary to address the inequities in American society, they are only a beginning. Focusing on slavery ignores the century of institutionalized discriminatory practices that kept black and other minority Americans from achieving the most important source of wealth accumulation: home ownership (https://www.huduser.gov/publications/pdf/wealthaccumulationandhomeownership.pdf ) The Post-WW2 economic boom was helped in large part by the G.I. Bill which promised low-rate mortgages, low interest loans and education to those who fought in WW2. But black veterans who fought to end a holocaust in Europe faced their own holocaust when they returned home in the form of lynching and red lining when they tried to cash in on the benefits of the GI Bill (https://www.history.com/news/gi-bill-black-wwii-veterans-benefits). The newly minted Home Owners Loan Corporation (HOLC), began rating neighborhood with four grades  A: “Best”, B: “Still Desirable”, C: “Definitely Declining”, and D: “Hazardous”